Visual Communication Design student Ata Kaan Koç has been selected semi-finalist for the 12th International Moving Film Festival that is held in Iran. Ata Kaan’s graduation project, a short animation movie called “Walking the dog before I sleep,” was chosen amongst 3046 movies from 120 countries.

The festival that is organized by International Moving Film School (IMOFIS) will be held between 8-15 of November 2019 in Arvand Free Zone, Iran. The organization has announced, starting from this year they will convert their format to movie contests. Until this year, they only screen independent movies.

Ata Kaan Koç has had four accomplishments for the last two years with this announcement. He has been selected to screen his work amongst the finest selections of NEOSFEST in Mexico, and IMPACTFEST in the U.S.A. 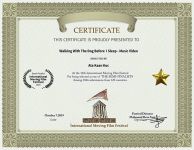